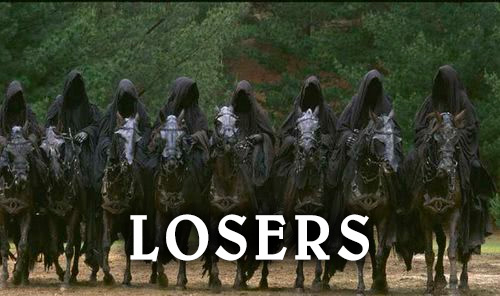 If you saw the Lord of the Rings movies, like me, and you thought it kicked total ass, you are a right-thinking person. Not the Hobbit trilogy, which was overlong, exhausting, and terrible, but the proper movies. However, if you saw Fellowship of the Ring and so on, there are no doubt burning questions in your mind.

The first important mystery facing us is, I have no doubt, why the nazgul (or “ring-wraiths”, or “9 slow-witted guys in black on big horses”) suck so much.

Think about it. Most of the evil forces in the movie, be they fifty foot tall demons or lumbering rock trolls or Christopher Lee’s monster eyebrows, were totally badass. The nazgul, on the other hand, spent all their time stabbing mattresses, lumbering after hobbits in slow motion, tripping over their dumb robes, and failing to achieve anything of note. I spent most of the first half of the movie worrying that they were going to fall and break their hips.

Compare. The rock troll required many grievous sword and wounds to slay him. In contrast, Strider single-handedly fights off five nazgul with a burning stick. Watch closely. In that battle, one of the nazgul, as far as I could tell, trips and falls off a cliff.

But sure. In that fight, they stab Frodo with a Spoooooky Nazgul Dagger. If you get stabbed with one of those, you die in several weeks. As opposed to the knives in my kitchen, which kill you pretty much immediately.

At one point, the hobbits escape the nazgul by getting into a rowboat and maneuvering six feet from the dock. The nazgul passively watch them drift off, overcome by the powerful Tolkein Olde Magic of, you know, water.

Klingons, they are not.

So why do they suck so much?

Actually, the answer is simple. Who are the ring-wraiths? They are the 9 humans originally given rings of power by Sauron. In other words, they are a pack of really, really old men. They are the Boomers of Middle Earth.

When you look at it this way, it all becomes clear. That is why they chase the hobbits so slowly. That’s their top speed! They could have done better, but their arthritis was acting up.

It’s sort of sad, really, when you think about it. Here they are, spending what should be their golden years riding through the wilderness, chasing short people and getting set on fire. They should be safely at home watching CBS.

It gets even worse when you think about it. Later, a nazgul is slain by some sword lady in front of some city or other. Don’t fall for the hype. This isn’t heroic. She was basically going into an assisted living facility and beating old people up for kicks.

(Still, when Éowyn kills the Witch King, is does tell us what you actually have to do to kill a nazgul: Try.)

It’s all rather poignant, really.

But all this brings up a second question: if the nazgul are so feeble and baffled, why does Sauron send them on such an important mission?

Well, this sort of thing happens all the time in real life. Imagine you’re starting a business. You hire a few hot kids. Go-getters, ready to rush out and get some sales. But time goes on. They get old. Raise families. Slow down. Develop beer guts. The fire in their bellies goes out.

Every office has a few old people who have been around forever, and everyone likes them, and nobody wants to be the one to fire them, and so they just hang on, dead wood, waiting for their pension. Driving Sauron nuts with all their stories about how freakin’ hard they were back in the day.

So Sauron has this situation. He wants to take over the world. And he needs to give his old pals, Bob and Frank and whoever, something to do. So he sends them out to beat up the hobbits. How hard can THAT be?

So they get to the Shire, and they’re finally getting a job done, and a human shows up with a burning stick and ruins EVERYTHING.

In sum, the nazgul are a sad and trenchant reminder of the sad fate that awaits us all in old age. Or, it’s Tolkein’s way of telling us that old people are no damn good.

At least the balrog was cool. Until it tripped and fell off a bridge.